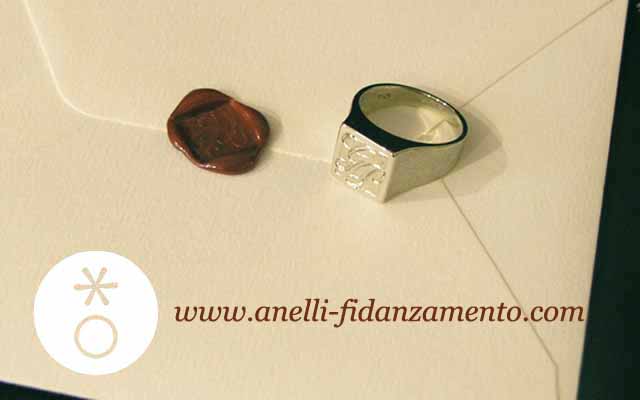 Until the beginning of the last century, men rivalled women in terms of wearing jewellery, especially when it came to rings, but with the passage of time this tradition has faded and it’s becoming increasingly rare for men to wear any kind of ring other than their wedding ring. While I’d like to see this trend reverse someday, in this post I’ll tell you about a ring I recently had the pleasure of crafting for a man. 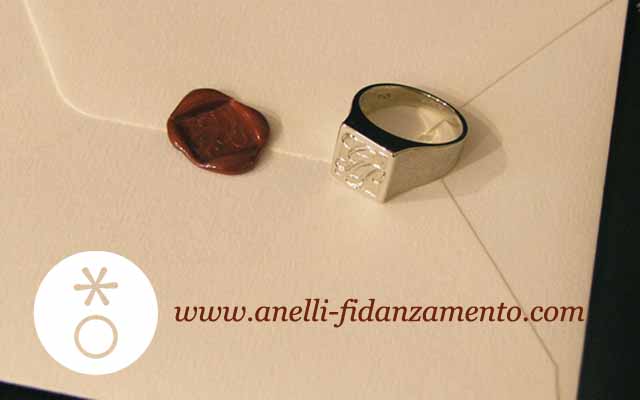 Customised ring in white gold with engraving, by Eva.

More and more often these days men wear their wedding ring hung from a chain around their neck because they don’t like wearing it on their finger. Some men would even rather get the ring tattooed on their fingers rather than having to deal with the constant feel of metal against the skin. But not long ago men’s rings (and I’m not referring to the wedding ring) were considered a status symbol, similar to wearing a Rolex today. All engaged men wore a golden ring engraved with their initials and/or the initials of the future bride, and many also featured a gemstone. Actually, a golden ring was not uncommon even amongst single men at the time, as it signalled that he had passed from boyhood to manhood.

Today, on the other hand, with few exceptions, rings are reserved for clergy such as bishops and cardinals. The most famous among these types of jewellery is the ecclesiastical ring, which bears the emblem of the pope and is used as a seal in papal documents. Once upon a time, however, each nobleman wore a ring with his initials and his family’s coat of arms, which also functioned as a seal, but we’re talking about a few centuries ago, so imagine my surprise when, not long ago, a young man commissioned me to make a golden ring with his name, both to wear as jewellery, and to use as a seal.

Needless to say, I completely threw myself into the task and the result is truly amazing! Considering he was thirty-something, early in his career, I needed to find a fresh, modern design, so I opted for a signet ring in white gold, with a polished profile and satin finish. I completed the work by etching his initials – G and P – by hand in classic, Old English characters. My client very much appreciated this touch of class.

A man’s ring is a truly original piece of jewellery. If you’re a guy who’d like to order his own customised ring, or if you’re looking to give your other half a ring as a gift, contact me. I’ll put all of my experience to work to help you see your idea through.